Reflections and updates from the producers of the True Colors Film Festival 2021.

We all know at least a couple of them. The most well-remembered lines from movies are not just note-worthy for their punchiness, they also tell a story about the times they were set in. These were times when space travel seemed like pure fantasy, politeness ruled communication, romance was alive and machismo rocked.

My pick of winning lines from TCFF 2021 films also tells stories, of how language is changing, how the once-silent are speaking out and how perspectives are changing.

“YOU’LL BE OK” These are the words of comfort, written on a palm by a finger, by a DeafBlind man to a young man who is alone and adrift. How much more plain-speaking and reassuring could you be? By the way, did I mention that this – Feeling Through – was the first film to star a deafblind actor? And that it was nominated for an Oscar this year?

“Are we so different and not like you, that you have to stare?” This is from the short film On Beauty. Courage and self-belief, for anyone to hold their head up, look you in the eye and ask this question. If you’ve ever been stared at because of your appearance or something you couldn’t help, you will totally get this. Or maybe you were the one staring…

“No, I’m not homeless. I’m just houseless. Not the same thing, right?” Have you ever thought of this, that not having a house/permanent address does mean necessarily that you are without a home? The line is an answer from a ‘nomad’ to a question in Nomadland, winner of three Academy Awards this year. It sure makes a lot of sense. What IS home, after all? A place, a state of being, an emotion….what do you think?

“There’s something off about this new girl.” A priceless line from Best Summer Ever, the first musical to feature a fully-inclusive cast and crew. It’s so memorable for me because the statement is not about the obvious wheelchair that the new girl uses; it’s something else that’s imperceptible, maybe it’s her confidence and assumption of equality, which is not appreciated by the “mean girl” who makes the statement.

Without having planned it, I was in New York on the 20th anniversary of 9/11, the deadliest act of terrorism on US soil.

Exploring the city on foot, bus, subway and cab, it was of course a must to visit the 9/11 Memorial & Museum on the anniversary itself. I was not prepared for the emotions that swirled in me. Like people around the world, I was affected and horrified when it happened all those years ago yet ¬ even though I have family living in the US – it always remained at a certain distance, because it was a news event watched on TV. 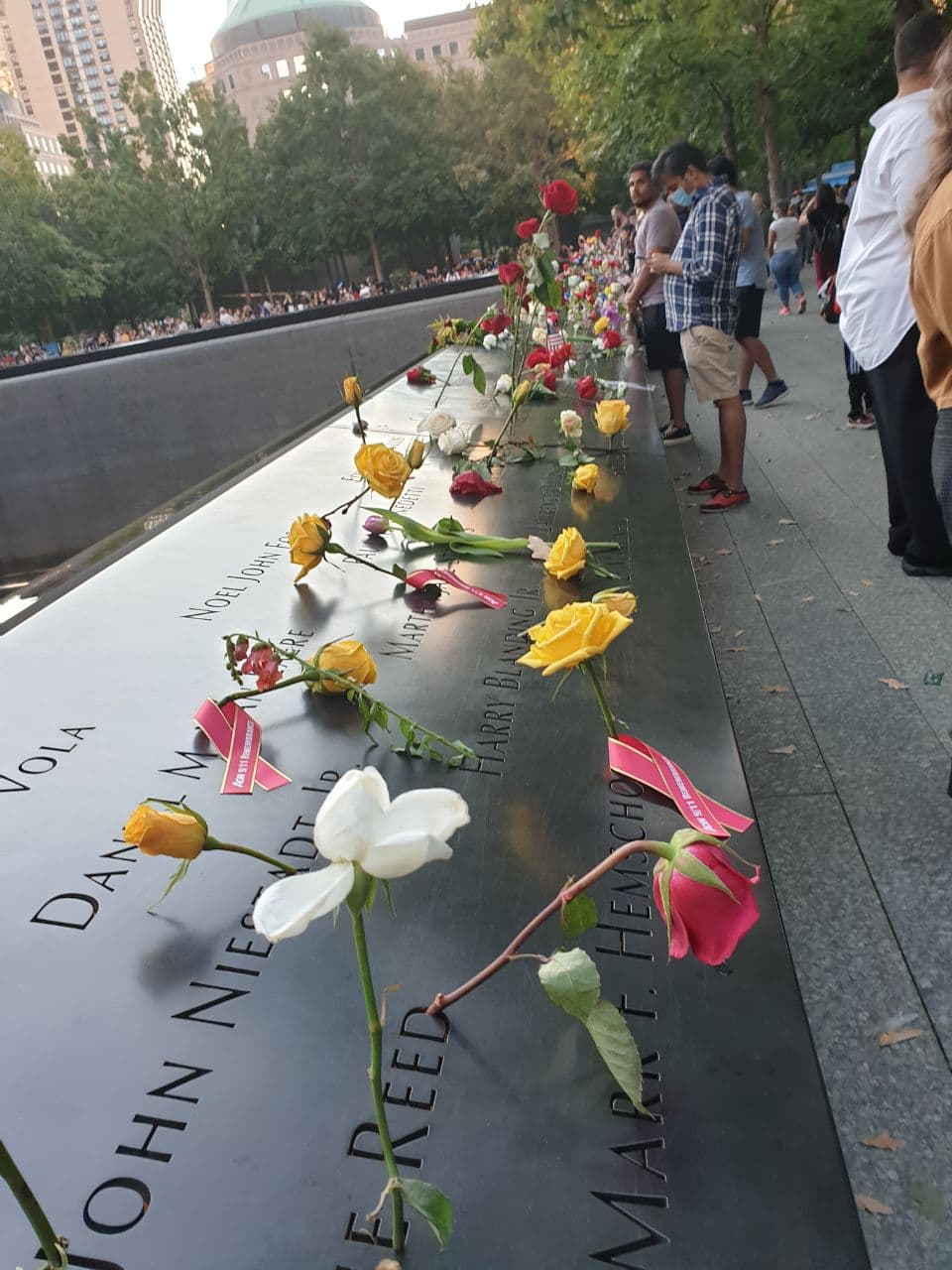 Memorial of the September 11 attacks on the World Trade Centre in New York on its 20th anniversary.

But here in the presence of such a thoughtfully created remembrance, at the very spot where the worst devastation took place, it was almost too much to bear. Nearly 3,000 people killed, and I could run my fingers over almost as many names inscribed in bronze if I wanted to. I could know that so many of the names were deliberately placed alongside names of people they knew, worked with, loved. I could read the messages of love placed by family members, and watch in silence as water poured ceaselessly into an endless void. This is what Loss looked like, up close.

But as important a life experience as this was for me, it was not going to be the most enduring memory that I would take home.

Days later, visiting a gallery in East Harlem, I knew as soon as I stepped through the door that this would be that memory. Positive Exposure is a unique community space, and the first of its kind in this history of New York City. Through the visual, performing and literary arts, it aims to break barriers and broaden perspectives of what diversity and inclusion mean. There is just so much to say about the work of this amazing global initiative which aims to help us begin to see each individual as a human being and a valued member of our society. 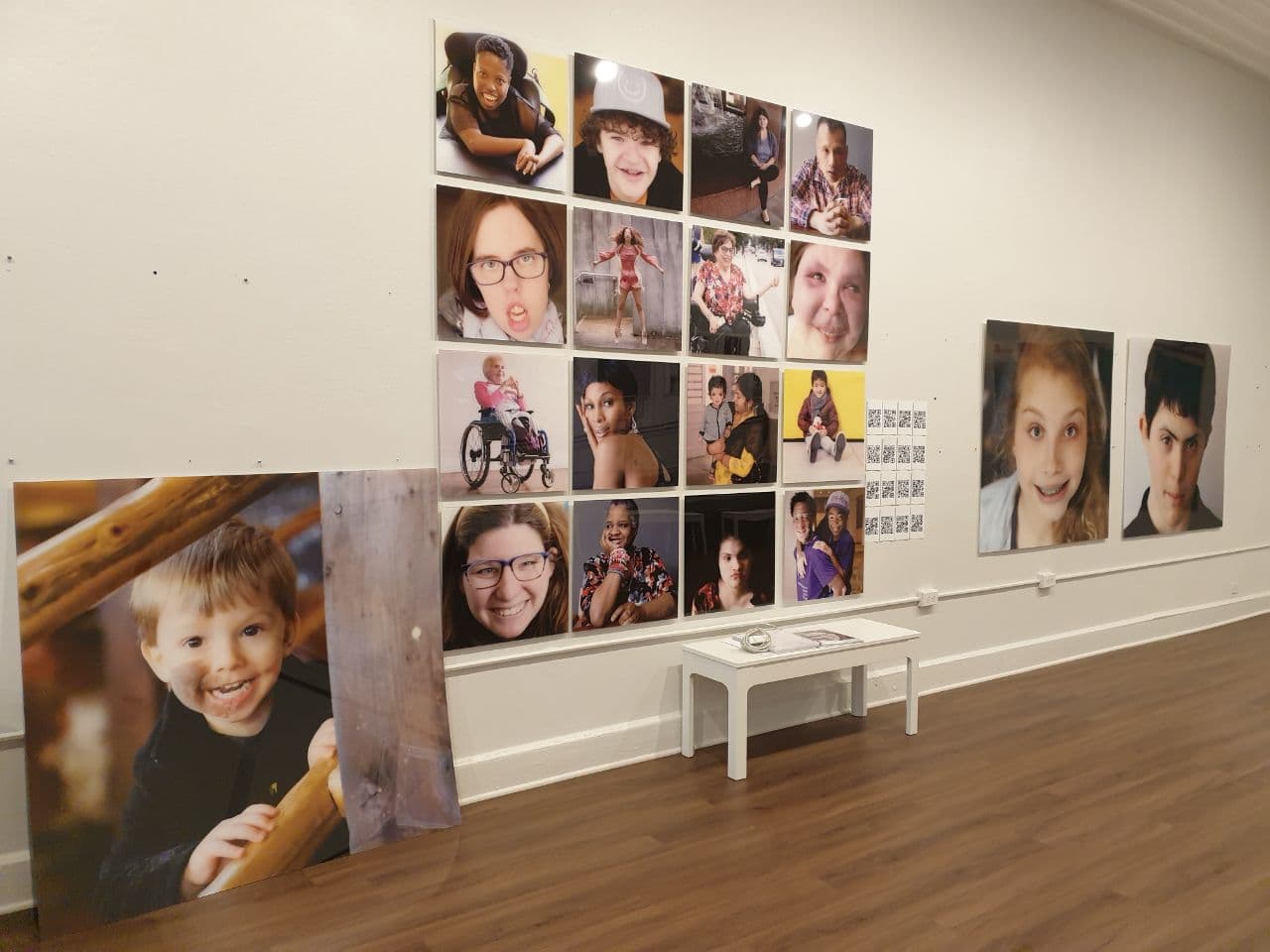 The Positive Exposure gallery walls present images of individuals captured at their most beautiful and expressive by former fashion photographer Rick Guidotti.

The Positive Exposure movement was founded nearly 25 years ago by photographer Rick Guidotti, and it all began with a chance encounter on a city street; a vision of beauty, and a life purpose sealed. As I walked through the gallery, I was surrounded by a sea of images of mostly children. The magic lay in the way they had been photographed. The focus was on their humanity – twinkling eyes, happy smiles, mischief, thoughtfulness, inner light. Such individuality, captured in all its diverse beauty.

They made me pause. How often do we judge someone based on thoughtless definitions of beauty and acceptability, in our thoughts, if not in our words? How often do we judge someone to be not beautiful because they are different from the norm? If we ourselves desire to be seen and respected for our individuality and for what we bring to the world in that very uniqueness, shouldn’t we acknowledge that same desire in everyone else?

These images – singly and collectively humbling – were to be the most enduring memory for me.

Rick Guidotti’s movement is the subject of On Beauty, one of the short films of the True Colors Film Festival 2021. You can also catch Rick in the dialogue, “On Beauty: Change how you see, see how you change” where he chats with Tokyo-based photographer Lily Shu and Singapore actor and host, Oon Shu An about his movement, perspectives through the lens and changing perceptions of beauty.

What are we trying to prove?

Our festival runs from 3-12 December 2021. The films have been researched, watched, shortlisted and selected by a programming team of five in Tokyo and Singapore.

We searched far and wide for films that have the power to make you pause, if not actually change your perspectives. We were the test, a team of idealistic individuals who are not easily impressed.

Permissions to stream have been sought, negotiated, received, and agreements signed (most of them!). The website is up, not yet with full information, but enough for a start, and right now it’s a slightly crazy schedule of checking and confirming detail upon detail before we release the full program to the public.

Yet it was not a straightforward decision to hold this online film festival. On the one hand, the first one, presented last year, was our most well-publicized True Colors Festival event yet, and we reached audiences in almost 40 countries. On the other hand, now that streaming platforms are proliferating like never before and bringing previously unimaginable access to content for people everywhere, why should viewers choose to stream the films in this festival? What’s special about it?

We asked ourselves tough questions. Why indeed? Are we just doing it for the sake of continuity? Do we need to? What are we trying to achieve, a new film festival not yet a year old, in a field against established festivals with stellar line-ups; on top of the streaming platforms issue? We were also keenly aware of the issue of representation in film, which has reached new levels of awareness and transformation this year.

After some soul-searching, we realized this: within the True Colors Film Festival 2021 program, you will discover a carefully curated collection of films and dialogues that will entertain, challenge, fascinate, inspire and change perspectives; films that are tender, tough to watch, heart-stopping, unforgettable. All of it is here for the taking, in this one festival. This is not the clever use of words – this is our promise.

True Colors Festival (TCF) presented by The Nippon Foundation is a series of performing arts events presented across geographies, in celebration of diversity and inclusion as “One World One Family.”

Through festivals since 2006 in Vietnam, Cambodia, Laos, Myanmar, Singapore, and Japan, TCF has presented more than 1,100 performing artists from more than 30 countries and attracted more than 40,000 people.

The re-start of TCF 2020/2021 marks its commitment to tap on the power of the arts to connect artists and audiences in experiences such as music videos, film screenings, children’s programs, musicals, concerts, and workshops.