Ben Price – manager of bionic pop artist Viktoria Modesta – has written about the impact of a degenerative eye condition on his career as a tour manager, the fear of losing his livelihood that kept him silent and how he came to terms with it and began to speak openly about it.

When I found out I was losing my sight a few years ago I was in the prime of my career. I had been a tour manager for a while and felt like it was where I belonged. My client roster had grown quickly, and my calendar was packed out for the foreseeable future.

I can remember the precise moment I realized that my eyes were failing me.

The support band had just finished, and my team’s 30-minute slot to prepare for the headline act I was working with had begun. I entered the Southampton Guildhall stage and immediately fired up my radio to my team, asking: ‘Can we please get more lighting on stage?’

I was sure something looked different, my eyesight had always been perfect but suddenly everything was dark; I had no awareness of what was around me. My team radioed back to tell me the lights were on the same pre-set they had been for every other night of the tour.

Confused and scared as to why I was struggling to see what they could, I fumbled through the rest of my tasks as best I could. Afterwards, I returned to the bright backstage corridor and immediately called my family.

I’d always known about a hereditary eye condition that ran in my family called retinitis pigmentosa (RP) – a genetic condition causing gradual loss of vision, often leading to total blindness. My grandad had extremely low vision but since I’d reached my 30s without any symptoms, I thought I had escaped it.

Retinitis pigmentosa predominantly impacts night vision. Unfortunately, this meant it affected me every day, at every show I worked. It was manageable at first, but it quickly got to the point where I was struggling in any dark environment. I had to stop driving, which cut my work in half – some bands I toured with could afford tour buses or additional drivers, but others relied on the tour manager to drive the van. 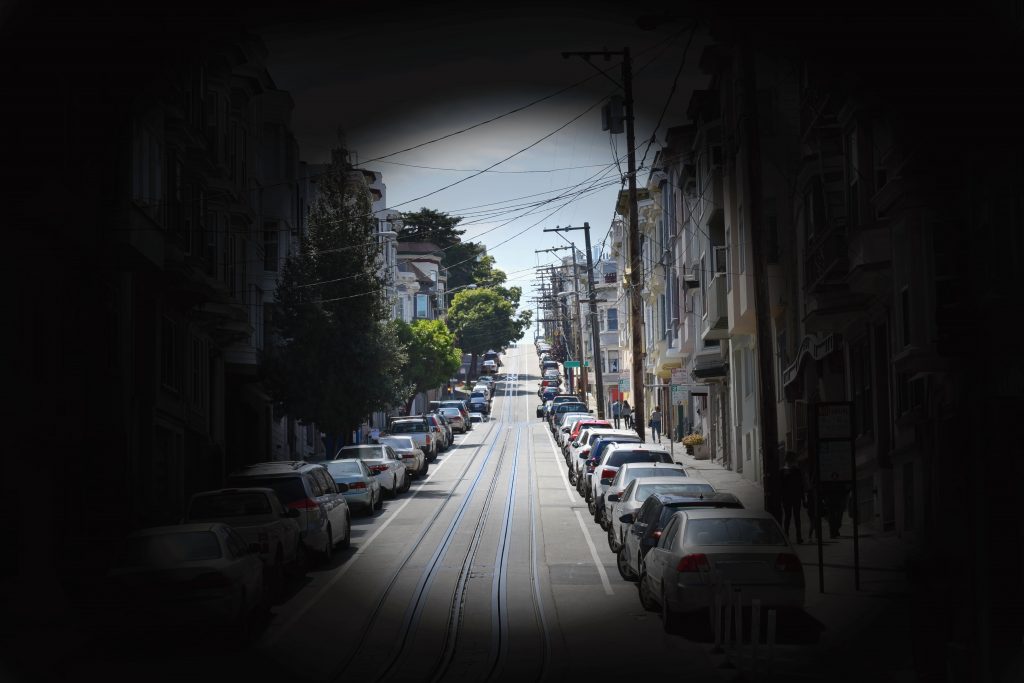 A sample of the vision that a person with RP, such as Ben, may experience.

As my disability was invisible, I decided to be selective about who I told. I thought I would lose work if I told my clients. No judgement on my clients – just that I knew how tight budgets were in touring, and asking artists to take a tour manager and a separate driver would have been a big ask.

Hiding my disability in the dark backstage environments was another challenge altogether. As my sight deteriorated, more people started to notice a problem. I’ve knocked over expensive guitars while packing down a stage, smashed my shins on more drum risers than I care to remember, and worst of all, have dealt with assumptions I’ve been drinking on the job after tripping over or bumping into something.

Still I didn’t broach the situation with the artists and promoters who employed me. In my head, I thought: ‘Why would I tell anyone?’ and: ‘What will they think if they hear the word ‘disability’?

I chose to struggle through, thinking that if I could watch my step a bit more, I could avoid arousing suspicion. It’s only now that I question my thought process.

Although I was surrounded by good people who I believe would have supported me, I still felt as if I had to hide my diagnosis due to some sort of pre-programmed negative connotations of how disability is viewed. It’s impossible to know where that came from, but I can only assume it was some sort of internalized ableism. I don’t think I’d ever had conversations with anyone about disability at that point, it felt like a taboo. I was worried I’d appear weak.

This state of denial lasted a long time, but as my eyes continued to deteriorate, I knew I needed a new plan – it just wasn’t going to be feasible to be on the road for the rest of my career. I started to move into artist management, beginning when a couple of the clients I tour-managed were in between managers and asked me to hold the fort. One of them was Viktoria Modesta, known as the world’s first bionic pop artist. Viktoria and I were talking about disability every day, but I didn’t tell her about my eyes for the first three years we worked together.

I planned to build up a new artist management business while battling through a few more years of tour management, but then the pandemic hit and wiped out all live gigs.

It was then that something twigged in me. If I were to plunge full-time into artist management, why not focus on working with disabled artists to help increase their representation in pop culture and bridge the gap between the disability arts world and the mainstream music industry? Until this point, I had never considered this.

In a strange way, the pandemic gave me the time to really come to terms with my condition and accept what was happening with my eyes. I now feel comfortable to talk openly about it and reflect on why for so long, I didn’t feel I could disclose it.

When I look back, I wish I’d had the confidence to be open and transparent about it sooner. While I had managed to struggle through a few more years of work, it had a real toll on me mentally, going into show days at venues I knew I would struggle in because of bad lighting. My only alternative was to not work at all. Perhaps making people in the tour party aware of my condition would have allowed me to make the odd clumsy mistake without feeling so pressured about it. I’m sure people would have given me some leeway if they’d known.

My story isn’t all bad though. While working as a tour manager, I chose to disclose my disability twice, and both times my experience was overwhelmingly positive. One promoter always made sure I was on jobs that didn’t need a driver, and on another tour, an artist made adaptations for me, asking the session musicians to share the driving instead.

These experiences should have given me the confidence to disclose fully to everyone I worked with, but they didn’t. If you are a touring crew member, you often don’t know when your next gig is, so to put myself in a position where I might not get called up for the next tour was incomprehensible.

I have written about my experiences as part of an Arts Council England-funded project, investigating the future of disability in the music industry.

I conducted a survey of almost 150 music industry professionals who identified as having a disability or long-term health condition. 71% stated that their impairment or condition is non-visible. Of these, 88% revealed they “sometimes” or “never” disclose it to those whom they work with, with 69% of this subset admitting that this had put their health and safety at risk.

These statistics say it all – I’m not the only one in the music industry who finds it difficult to say they have a disability. I could have made my touring career much more comfortable if I’d felt like I was able to tell people I needed extra help here and there.

I also wanted my survey to explore the media perceptions of disability. I’ve heard it said often that the media has a habit of focusing on the tragedy of disability, rather than emphasizing empowerment and inclusion – something that 85% of my survey respondents either ‘agreed’ or ‘strongly agreed’ with.

Every disabled artist I have worked with or spoken to during this process has given the same consistent message. They’re proud of their disabilities – not because they define them, but in fact, because they do not. Artists don’t want to have to talk about their disability more than their art.

Yet so often when I’ve arranged media interviews with my artists with disabilities, the journalist will want to focus on the hard-luck story. If the media can begin to focus on the person rather than their disability, that might go some way in changing the message young disabled people receive, and help them to aspire to one day work in music.

So, what factors could be contributing to the under-representation of people with disabilities working in music, and making those that do work in the industry reluctant to disclose?

One area my survey explored was the theory that a lack of visibly-disabled role models could be a big reason – something that 90% of respondents to my survey ‘agreed’ or ‘strongly agreed’ with.

If young disabled people don’t believe they can make it in the industry due to a lack of representation, then the disparity can’t be fixed overnight, and it may take generations to see significant changes. For things to shift, we need to change the message we are sending to young disabled people who might aspire to one day work in music.

There is plenty of work to be done to break down the stigma surrounding disability within the music industry – and beyond. If we can do that, then perhaps in future more people will feel comfortable disclosing their conditions and get the support they need to thrive.

For me, now I feel much more at ease with myself. My work is behind a brightly lit desk and I don’t wake up with the sense of dread I used to get if I knew I was going into a dark environment.

My earnings are ultimately down; going from being an experienced and busy tour manager to the business owner of a start-up has its impact. But I’d take it any day over feeling like I am working in an unsustainable environment. I used to think I would just work on the road until I literally couldn’t hide my condition anymore. I am glad I made a positive decision for myself before it came to that.

Disclosing is a very personal decision to take for anyone with a non-visible disability and will always depend on personal circumstances, so I don’t do so in such a public way necessarily to encourage others to do the same. I am doing this to speak to the industry as a whole in the hope that the more we talk about people with disabilities working in music, the more accessible the industry will become – and that would give people the confidence to know their disclosure will be a positive experience.