True Colors Film Festival 2021 reaches a viewership of more than 22,000 from 71 countries!

Highlights of the True Colors Film Festival 2021, which ran from 3-12 December 2021, included several Oscar winners, the first musical film to feature a fully inclusive cast and crew, the first DeafBlind actor to star in a film, and more.

The recently-concluded True Colors Film Festival 2021 reached a record-breaking 22,000 viewers — three times as many as watched the inaugural edition in 2020. Viewers tuned in from 71 countries including the US, Japan, Canada, Singapore, Australia, the UK, Spain, India, New Zealand and Germany.

It was thrilling for us as producers, to realize that around the world, individuals and groups of family members and friends were experiencing a shared feast of 31 features and short films which we’d carefully curated. Many of the films were award-winning – but it wasn’t just about awards; all the films were selected for their diverse and sometimes radical perspectives about life, passions and human connections. Each offered so much food for thought and conversation.

“I absolutely love and enjoy the curated film selections this year!! Kudos to the selection panel for their discerning eye during the films [sic] selection process!”, wrote a viewer in our post-event survey.

Highlights of the festival included Feeling Through (2019), the world’s first film featuring a DeafBlind actor, nominated for an Oscar in 2021; the first Screen Actors Guild-registered musical to feature a fully-inclusive cast and crew, Best Summer Ever (2020), and multiple Oscar-winner Nomadland (2020). 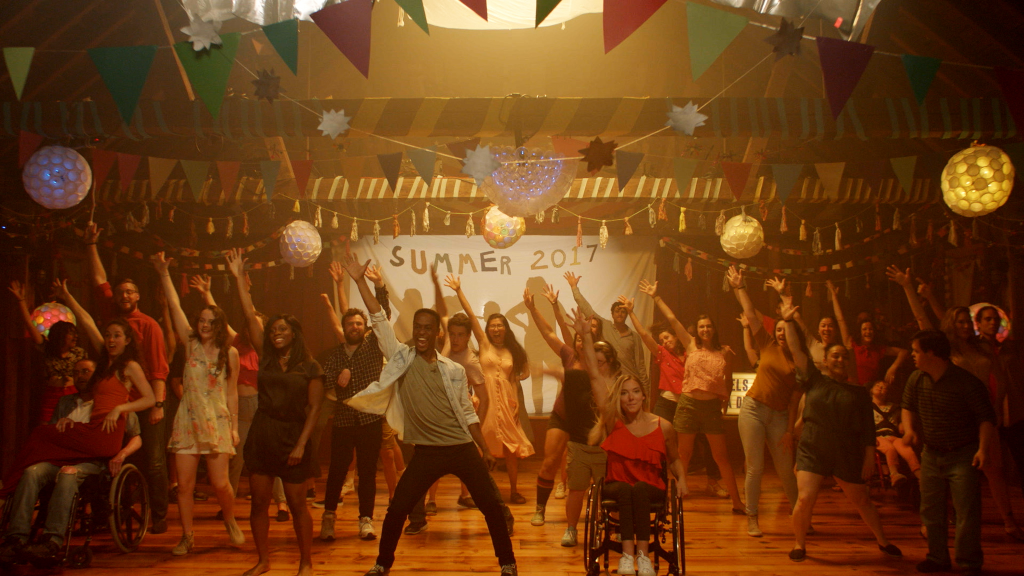 Image  description: A still taken from the movie “Best Summer Ever”. ​A group of ​youths, including wheelchair users, are in a hall with ​big ​smiles on their face​s. They are ​dancing​ with their ​right hands up in the air. Rickey Alexander Wilson, who plays ​the role of ​Tony Michaels​ in the film​, is standing in the middle of the hall. He is wearing a gr​a​y shirt with a denim jacket and a black jeans. There is also a white screen behind everyone, which ​reads “Summer 2017”.​

Also on the program this year were two True Colors Festival original documentaries released in 2021 — The Future Is Now! and Clothes In Conversation (New York Film Awards winner of Best Documentary Feature for May 2021and London Fashion Film Festival 2021 Official Film Selection). Both documentaries are in the Official Selection list of the Fashion Film Festival Milano 2022, taking place from tomorrow!

Viewers also got to tune in to watch conversations with filmmakers, cast members, cause champions and inclusion advocates. The sessions were so lively and passionate, as they exchanged views and discussed important issues like acceptance, representation, beauty standards, advocacy.

Viewers heard first-hand from directors Doug Roland (Feeling Through), Tunku Mona Riza (Redha), Amanda Lukoff (The R-Word); sibling and self advocates, Tasneem Majeed and Allan Cai; photographer Rick Guidotti (whose work is the subject of On Beauty), photographer Lily Shu and others. If you missed these conversations, you can still watch them on the True Colors Festival YouTube channel.

For the first time, we created an outreach program that made it possible for group streaming of some films via Zoom, as well as to reach preschools and art schools in Singapore.

The preschool program involved a specially created lesson plan around the 4-minute film, The Present (winner of 81 accolades from film festivals), about a boy whose life is changed when his mom adopts a very special puppy. Students aged 4 to 6 took part in interactive activities before and after watching the film, and talked about differences, their feelings about those who look different from them, and problem-solving to make life more accessible for those with disabilities.

“We must be kind to children who are different,” said a Little Sparks Nursery 2 student.

“It was a good lesson to teach the children to be more receptive of others who are different,” said Ms Nanda, Littlesparks Montessori Kindergarten Principal.

The pre-school program continues until the end of this month. Also taking place soon are three film maker dialogues organised by La Salle College of The Arts’ Puttnam School of Film & Animation. The audience of film students will watch each film fully or in part, and then participate in a Q&A with the respective film makers, Yoichi Ochiai, director of True Colors Fashion: The Future is Now!, Hiroki Kawai, director of Clothes in Conversation, and Doug Roland, director of Feeling Through.

“True Colors Film Festival…encourages us to look through the perspectives of those who appear different from us, and imagine a more beautiful world together with them,” wrote actor and DJ Jo Tan about the festival in an Instagram post.

We couldn’t agree more! Thanks to everyone who journeyed with us to discover new and profound perspectives through film; and special thanks to all the filmmakers who partnered with us and gave us the opportunity to share their powerful work with a global audience. Our True Colors Festival message comes to mind as we write this – when all is said and done, we’re One World, One Family!