8 reasons why you must catch True Colors Film Festival 2021!

Oscar winners, the first musical film to feature an ensemble of actors with disabilities, and the first DeafBlind actor to star as a DeafBlind man… and more! We’re talking about the True Colors Film Festival 2021, streaming from 3-12 December 2021.

Back by popular demand, the True Colors Film Festival (TCFF) last year drew 8,000 viewers from 39 countries,  and we’re aiming for even more to experience it with us this year!

This year’s theme “Perspectives” offers a feast of 31 films, many of them award-winning, but all selected for their diverse and sometimes radical perspectives about life, passions and love.

1. You probably missed it on the big screens because of COVID-19 restrictions, but we’ve got it for 24 hours!: Nomadland, 2021 Oscar winner for Best Picture, Best Director and Best Actress 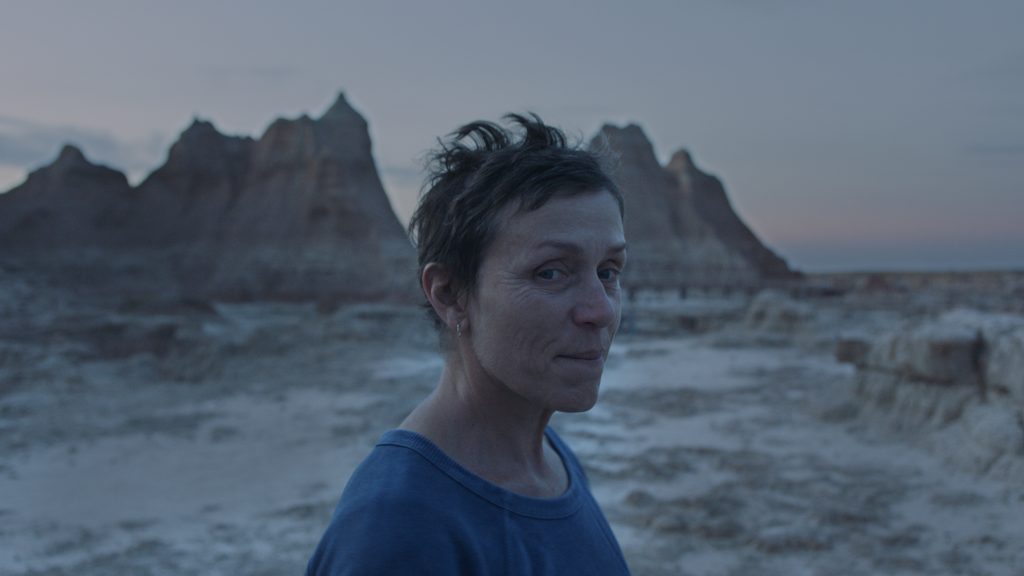 Image description: Nomadland’s leading character, Fern, in the breathtaking landscape of the American West. She has short cropped hair and is wearing a blue top. She is smiling slightly. Fern is played by Frances McDormand who won Best Actress for the role at the 93rd Academy Awards, 2021.

It might be set against the often breathtaking landscapes of the American West, but this film speaks to the soul of every human in search of independence and adventure. Lead actor Frances McDormand plays Fern, an out-of-work-out-of-options woman who sets off on the road as a modern-day nomad. Forced to rely on herself entirely, she discovers her strength, and along the way meets other nomads who become mentors. Directed by Chloé Zhao, Nomadland features real-life nomads Linda May, Swankie and Bob Wells in a clever interplay of actors and real characters. Soul-stirring and with landscape as a palpable presence, it’s no wonder this film won the three most coveted Oscars, for Best Picture, Best Director and Best Actress.

Complimentary streaming for viewers in Japan and Singapore on Virtual Screening Room from Filmbankmedia for 24 hours only on December 11. Registration is required, so sign up now.

There’s no shortage of Asian stories in the TCFF selection this year. Highlights include: Kusama Infinity, a documentary about the life of Yayoi Kusama who overcame sexism and racism and became the top-selling living female artist in the world; Redha, a powerful tale about a couple’s all-conquering love for their son who has autism; Dad’s Wedding about Seiko, whose father’s second marriage is to a man with two kids; and When a Song Begins, the story of a deaf photographer whose life changes when a lullaby slips through his lips one day.

On Beauty: Former fashion photographer Rick Guidotti saw beauty everywhere and got tired of working within the narrow and punishing beauty standard imposed by the media. He had an ‘Enough!” moment which led to him founding a global movement called Positive Exposure. Best Summer Ever is the first Screen Actors Guild-registered feature film with more than half the cast and crew having disabilities. Catch Bigger than Us, a peek behind the scenes of how it was done. Vision Portraits follows the journeys of four blind and visually impaired artists – a photographer, a dancer, a writer, and the film’s director, Rodney Evans – as they design ways to pursue their creativity. Full Picture is about a social experiment around how much we should reveal in this age of Zoom relationships. 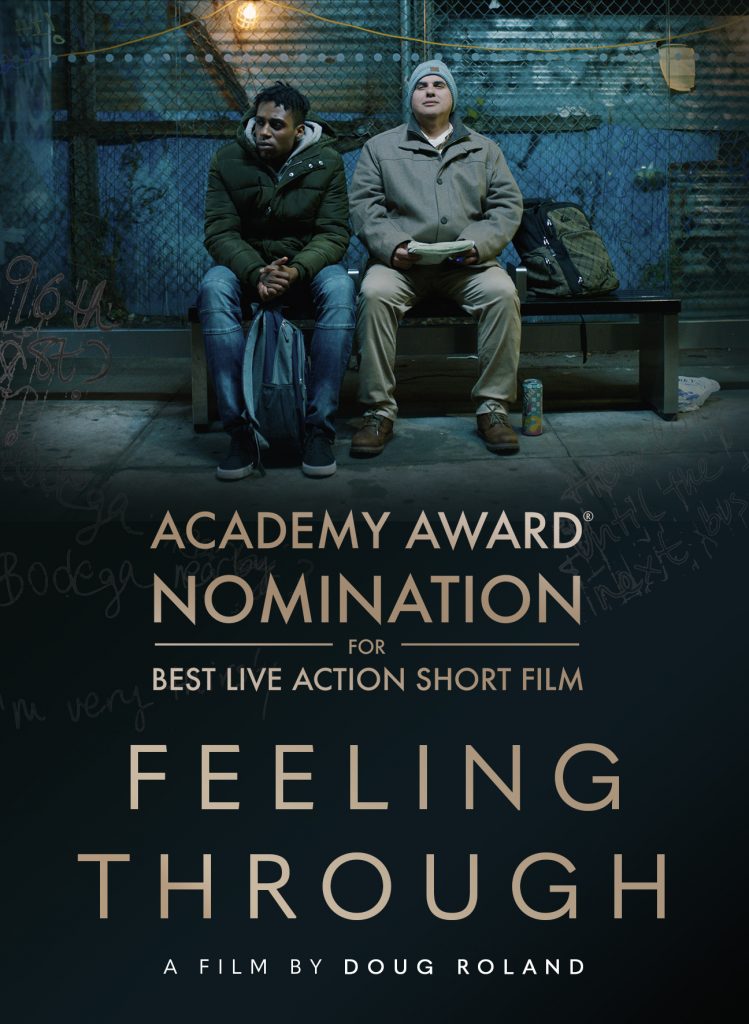 Image description: Promotional poster for the film, Feeling Through, an Academy award nominee for Best Live Action Short Film. A teen and a man sit side by side on a bench set against the streets of New York. The teen, played by Steven Prescod, has black hair, and is wearing a dark green coat with blue jeans. The DeafBlind man, played by DeafBlind actor Robert Tarango, is wearing a grey beanie with beige colored coat and pants, and he is holding a book.

Feeling Through (Academy Award® nominated in 2021 for Best Live Action Short Film) is the first DeafBlind actor to play a DeafBlind character. My Feral Heart (14 international awards including National Film Award) is a story of a young man with Down syndrome who navigates loss, change and a new life accompanied by two unlikely friends, The Silent Child (2018 Oscar), about a deaf child whose world of silence is shattered beautifully when she is introduced to sign language by a caring social worker. Helium (2014 Oscar), about a young boy facing death and choosing to believe in a special place called Helium.

For the kids: Zootopia – revisit this classic Disney film that’s big on laughs and action, and big on life lessons about roles, relationships and dreams, and The Present, about a game-obsessed young boy who faces his insecurities with an expected gift. For the parents – Redha, a stirring Malaysian drama about the journey from denial to acceptance with the parents of a young boy with autism. The R-Word is a deep-dive into the history of the cutting word “retard” which explores the reasons why it must be banned.

Fact or fiction, 3 to 30 minutes long, these beautiful stories from 12 countries are there for the taking! Our 21 short films are great for time-starved individuals who want more than your regular YouTube content. 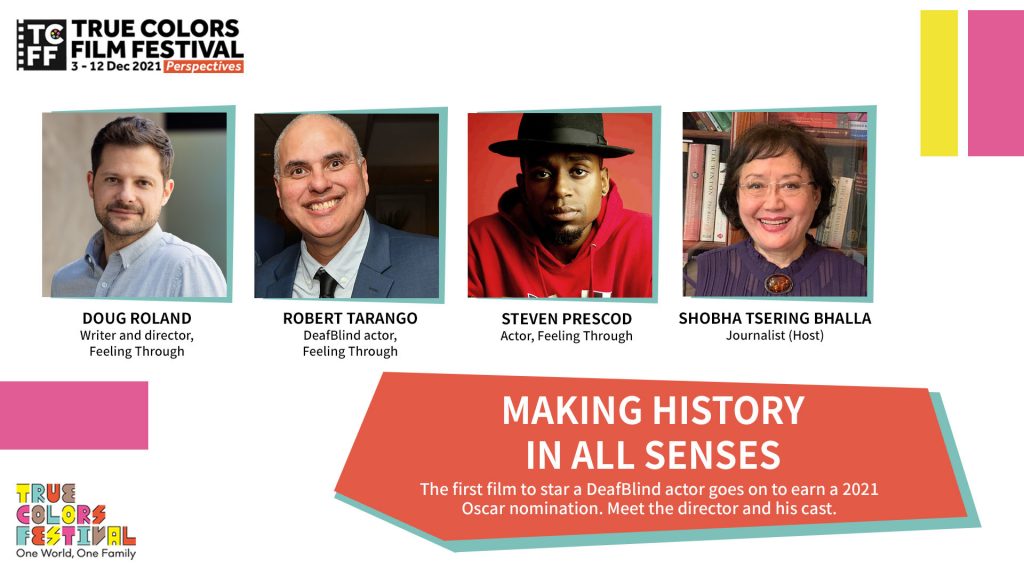 Image description: Promotional poster for one of the four True Colors Film Festival dialogues. This one is titled “Making History in All Senses”, and it explores issues raised in the film Feeling Through. The poster features professional headshots of Doug Roland, writer and director of Feeling Through; Robert Tarango, who plays a DeafBlind man, Artie, in Feeling Through; Steven Prescod who plays the role of an unhoused teen, Tereek, in Feeling Through; and Shobha Tsering Bhalla, journalist and host of the panel discussion.

We’ve brought some of the best story-tellers to the table to discuss topics around advocacy, challenging perceptions through the lens, telling difficult stories honestly and making film history. Panelists include Doug Roland (director, Feeling Through), Rick Guidotti (On Beauty), Amanda Lukoff (director, The R-Word), and Tunku Mona Riza (director, Redha). Singaporean audiences will recognize the names of hosts, actors Oon Shu An and Aidli Mosbit.

This year, True Colors Festival released three documentaries. Clothes in Conversation (New York Film Awards winner of Best Documentary Feature and Official Selection, Fashion Film Festival Milano) and The Future is Now! push the boundaries of fashion as we know it. When the Song Begins: One Year Later documents the reunion of When the Song Begins (also showing at TCFF 2021) director Hiroki Kawai, and deaf photographer and subject of the film Harumichi Saitoh.

All of the features, short films and dialogues are absolutely free to stream online. For more information, visit the True Colors Film Festival 2021 website. Exclusions apply.