In celebration of International Women’s Day, we celebrate four women who have made it their life’s work to further their causes through the arts and advocacy. Meet Ryoko Nakajima, a “wheelchair influencer” who puts herself in the spotlight to help more Japanese people get comfortable with helping people with disabilities. 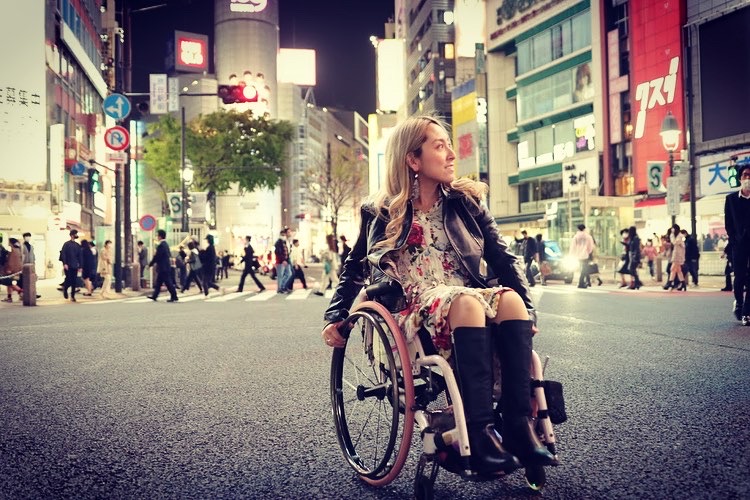 Q: When did you first realize you had the power to change mindsets towards people with disabilities?

Four years ago, I met a woman who had a condition that caused her to lose her ability to walk over time. Although her condition worsened by the day, she continued to hold her job at IBM and worked as a singer in her free time. I got to know of her story on Facebook and really wanted to meet her, so I sent her a message and we started to get closer. I was so inspired by her; though her condition is worse than mine, she was always so positive and continued to be self-reliant. She’s the one who suggested creating a girl group of wheelchair users. After our first performance, many in the audience who had disabilities told me that they were so inspired by our performance. It was also she who encouraged me to quit my job to become an influencer full-time.

Q: What has been the most rewarding part of your work?

I enjoy giving public speeches, especially in schools because many kids have no barrier in their minds. So after speaking, kids come to me and ask many questions like, “Can we play arm wrestling? Because you have big arms because you use your arms often. Can we do that?” They come to me and we play sometimes. They don’t have any barriers, so I feel like I can break that barrier between people with disabilities and people without disabilities. And that is one of my goals. So if the kids have such experience, like playing with wheelchair users like me, they grow up and they become adults who get used to communicating with people with disabilities. That’s why giving public speeches at schools is one of my favorites.

Q: Swimming is just one of your many passions. How did you become so passionate about it?

After I became a wheelchair user when I was nine, I thought I couldn’t swim anymore. I didn’t go to a school with specialized care for kids with disabilities, so I just watched the other kids swim. The first time I attended a PE class for disabled people was when I lived in America. They called the class adapted PE and I chose adapted swimming. My first day in class, I was surprised to see that the teacher was also in a wheelchair. It was scary on the first day, but the teachers assisted me in and out of the pool while teaching me how to do it myself. But I kept coming back. It was awesome to have PE lessons tailored to the needs of people with disabilities.

Q: What are the differences in the perception of wheelchair users in America and Japan?

I think it’s very different. I was so surprised the first time I went out in the US. People would say hi to me and ask why I was in a wheelchair, or if I needed help. They would just have a conversation with me, even if we were meeting for the first time. But this doesn’t happen in the streets of Japan. Like if they see me, they don’t say anything or even offer to help. Some even express surprise to see me in a wheelchair.

Q: What do you think are the reasons for the different reactions?

Q: What was it like to be a part of the torch relay for the Opening Ceremony of the Tokyo Paralympics last year?

It was my brother’s ex-girlfriend who asked me to apply for the role of torch barrier. I wrote in explaining my situation and how my life changed after meeting a person with a disability – that I have now made it my goal to change Japanese society for the better. They accepted me right then!

On event day, I was with four other people. One of them was an old lady who began to talk to me, who turned out to be my coach from back when I played on a wheelchair basketball team. I was so happy that she took her time to talk to me. Through our conversation, she reminded me that people with disabilities can do anything and can live just like everyone else. The first time she told me this, I couldn’t accept it. But just then, 25 years later, I was standing next to her as someone who works to spread the same message.

Q: Is there any upcoming project or performance you are excited about?

Besides a TV drama, which I’m not sure how much I can reveal about, I worked in a movie last year called First Mission. It should be released sometime this year. I’ve always wanted to be in the credits of a film, but as an editor. Now I get a credit to my name — but as an actress! It has been amazing. What I like about the film is that the story doesn’t focus on my disease or how I started using a wheelchair. Instead, I played the boss of the mafia and it was like Kill Bill – I shouted a lot and got to “kill”. It just so happens that the role is played by a person with a disability, so I was really pleased with the role.

Q: The message of True Colors Festival is “One World One Family” – what do these words mean to you?

I think everybody is like a family. If I didn’t have someone who helped me, I wouldn’t be able to live independently; I wouldn’t have been able to work as a wheelchair influencer. I will always thank the people who have supported me – anybody who supported me or cheered me on, is like family. I also receive energy from those people; and some people say they have energy from me, and we interact with each other, so everybody helps each other; that’s like a family.

This interview has been edited and condensed.