Here at True Colors Festival, we are a big family of artists, creators and planners. In this instalment of the Meet the Family series, we introduce Nanako Yamaguchi, creator of the True Colors Festival animated cartoon series Diversity On The Streets.

Accolades: Studied Museology and Art Education at Musashino Art University Department of Arts Policy and Management and then worked as a magazine editor, and as a freelance illustrator, writer and art director.

About the series: Diversity On The Streets illustrates the challenges that confront people with disabilities as they go about their daily lives. Each edition features an animated character inspired by a True Colors Festival artist. Catch new episodes on TCF’s Instagram and TikTok channels in English and Japanese.

Q: How you are involved in the True Colors Film Festival?

I’m the creator of the Diversity On The Streets (#diversityonthestreets) animated cartoon series for TCF’s social media. The first episode is based on an interview I did with Daiki Nishimura, a dancer with achondroplasia, also known as dwarfism, about the challenges he faces while going about daily life.

I try to make the best use of my skills to bring this series to life. As a writer, I am able to convey as realistically as possible the conflicts that may arise as a person with disability navigates their way in society, and as an editor, I summarize these conflicts into episodes. Then as an illustrator, I try to express these issues through animation, which is engaging and easy to digest.

Watch episode one of Diversity On The Streets: “My Day with Dwarfism” on Instagram and TikTok. 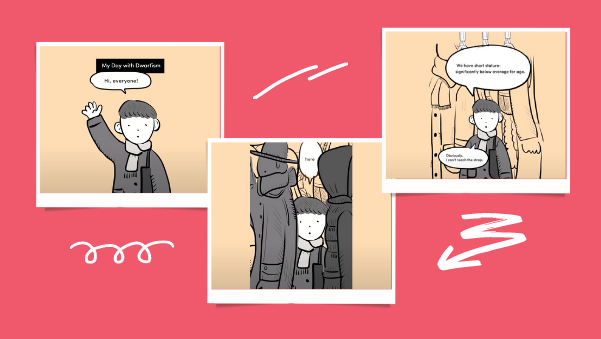 Image description: Snippets from episode 1 of the Diversity On The Streets animated series by Nanako Yamaguchi. Find it on social media: @truecolorsfestival on Instagram and @truecolorsfest on TikTok

Q: Tell us about a memorable experience that you had while working on the series.

Through my interview with Daiki, I realized that I had never really tried to learn about disabilities. I realized that there were so many things that I had not paid attention to because they were “not relevant to me”. I feel fortunate to have been involved in this project, and I wish that society as a whole would be more imaginative and willing to learn more about these things. I hope this project will be a trigger for that.

I was also impressed by the fact that, while writing the storyboard, I was able to exchange ideas with the True Colors Festival team on how best to describe the scenes — everything from the choice of words to the key message. Those discussions have been so valuable to me, because they inform my attitude towards thinking about diversity.

Q: Who are some of your artistic inspirations?

I like Fred Sandback’s work, and I would like to create works that expand the viewer’s imagination with minimalistic expressions like his do, but it’s not easy because my mind is a mess to begin with! I’m also very much influenced by the illustrators, creators, and musicians around me, and I’m always jealous and envious of their work, which is a big part of what drives me. Of course, their work inspires me too.

As an illustrator, I would like to be like my eternal hero, Makoto Wada, a famous Japanese illustrator active since the 1970s. He draws people, animals, landscapes, both realistic and fictitious. When I have writer’s block, I listen to recordings of my favorite Rakugo (Japanese traditional comic story) storytellers. I love Rakugo.

Q: The message of True Colors Festival is “One World One Family”. What does this mean to you?

I’m thinking, no matter where we are, we are who we are and we can always join hands. To me “one world” means that all people on this earth are respected, and that this will never change no matter what the circumstances. Rather than regarding the world as a single entity, I would rather say that although there are many different environments and places, the fact that a person is who they are is unchangeable. The word “family” in “one family” could mean a strong sense of unity on the one hand, but I think of it more of an attitude of deepening mutual understanding, acknowledging each other’s differences and distances, and helping each other in any situation.